Yesterday I received my weekly email bulletin from San Quentin. A prisoner who was serving a life term with the possibility of parole, Thomas Curby Henderson,  “fell” off a fourth-story tier (imagine a catwalk 4 floors up) in the infamous West Block of the prison last Tuesday. “Fell” is a euphemism for “was thrown off.”  Who pushed him to his death is not known but the prison was “locked down” while guards investigated, examining the cells, bunks and lockers of all prisoners.

Henderson’s first parole hearing was to be on March 12th. 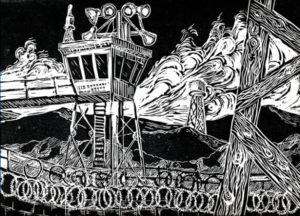 If there had been rehabilitation programs at San Quentin instead of merely “corrections,” perhaps Henderson would not have been thrown off the tier.  We’ll never know. Since a major cause of current overcrowding in California prisons is the high number of re-offending parolees returning to prison, it makes sense to start these rehabilitation and re-entry programs now, thereby gaining the dual benefit of reducing the prison population and protecting public safety. In spite of numerous studies about the necessity of re-entry programs that provide housing, job training, and employment opportunities, Brown continues to withhold funds for these programs. One can only wonder why.

The state of California had a vibrant Arts-in-Corrections program from 1977-2010 that brought professional artists/teachers, actors, and musicians into the state prisons to teach and work with inmates. Arts programs teach self-discipline, problem solving and concentration and prisoners gain insights about themselves in the process. The Arts-in-Corrections program was de-funded in 2010 but artists and teachers continue to volunteer their time without pay to work in some prisons.

This past weekend, The Laband Art Gallery at Loyola Marymount University focused on the theme of restorative justice with an exhibition entitled “Voices of Incarceration”. The exhibit brings together works by incarcerated artists who convey their unique perspectives from inside the prison walls and those of artists who confront the American criminal justice system from outside its walls. “Both groups bring to light the emotional costs and injustices of the Prison Industrial Complex.”

As I looked at the work in this exhibit I thought about the lives, like Tom Henderson’s, wasted by the ignorance and arrogance of public officials who prefer to play power games with human lives rather than utilize creative means to bring dignity and skills to those who have the time to benefit from them. Studies show that participants in the Arts-in-Corrections program have 75% fewer disciplinary actions and a 27% lower recidivism rate than the general prison population. This translates into reduced incarceration costs to the public, as well as improved lives. 90% of inmates will return to our communities and it serves us all to offer opportunities for rehabilitation, change and hope.

8 Comments on “Two Faces of Prison”