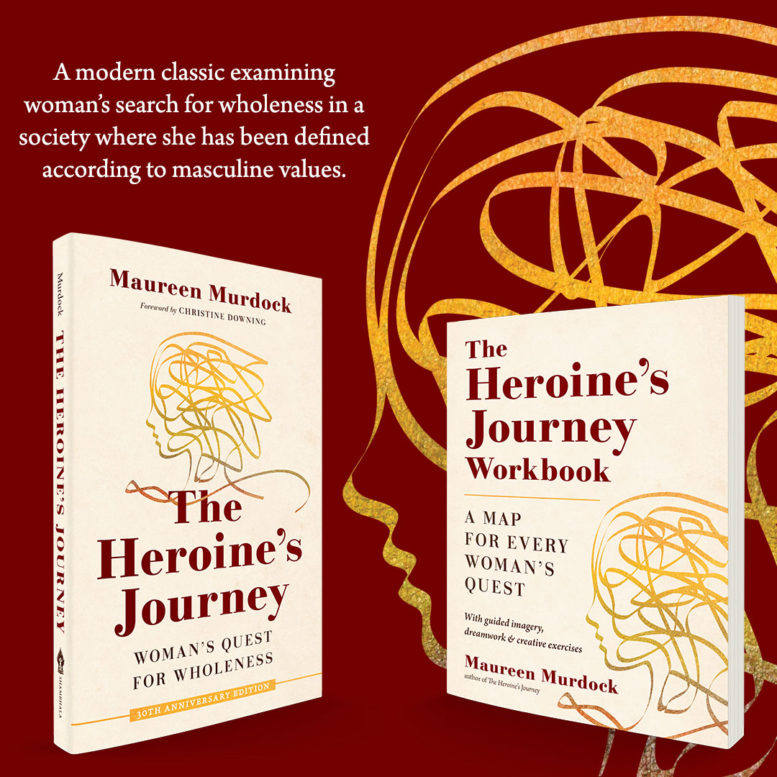 I wrote The Heroine’s Journey 30 years ago when women of my generation sought validation from patriarchal systems and found them not only lacking but terribly destructive to the feminine psyche. We were the children of the post-Sputnik era who were encouraged to excel in this competitive race in order to recover Western supremacy.

Unfortunately, the historical cycle is repeating itself. My granddaughters, children of the post-911 generation, are implored to “Make American Great Again” in a 1950s desire for American supremacy. In our capitalist society, everything is geared toward getting the job done, climbing the academic or corporate ladder, achieving prestige, position, and financial equity, and feeling powerful in the world. We continue to focus on individual success rather than structural change.

When I wrote the book, there had been no recognizable archetypal pattern that fit women’s experience. Throughout my life and my work as a psychotherapist, I noticed that women were quick to blame their feelings of inadequacy on their own shortcomings. I wanted women to understand that the widespread prejudice against the feminine emanates from the larger society. The continuing devaluation of women on the societal level affects how a woman feels about herself inwardly and how she perceives the feminine. It was what I called, at the time, the “Myth of Female Inferiority or Deficit Thinking.”

Women’s lives have a mythology that differs from men’s, so we deny who we are when we measure our success, fulfillment or satisfaction by the milestones of the hero’s journey. When a woman focuses on the process of her inner journey, she receives little recognition and less applause from the outer world. The questions she asks about life values make those who are committed to the quest for the outer trappings of success uncomfortable. And social media, which rewards superficiality, reinforces the denigration of introspection and the inner journey.

Since 1990, there has been a dramatic shift in focus for women. Women are making a huge difference in society by showing what can be done when we step forward together in a spirit of collaboration rather than competition.

Aside from the record-breaking number of female candidates for president of the United States, almost 25% of Congress is female. As Speaker of the House of Representatives, Nancy Pelosi is second in line of succession to the president after the vice-president. And this week, with Joseph Biden’s pick of Kamala Harris, we have the first Black Democratic woman running for the office of Vice President. Three women serve on the Supreme Court. The worldwide phenomenon of the #Me Too Movement has exposed the insidious sexual abuse and harassment of women and young girls throughout all industries, sports, and religions. Across the world, nations and states led by women are handling the scourge of the Covid-19 virus better than male leaders, enacting measures to bring their caseload down to zero.

In the entertainment industry, “Wonder Woman” was the first big budget movie directed by a woman. In publishing, women now hold the top positions at Simon and Schuster, Knopf, Henry Holt, and Pantheon and Schocken Books. This is an exciting step forward for women; the stories they champion will shape our worldview for decades to come.

These milestones indicate a dramatic shift. And yet.

Little did I imagine that we would face the same archetypal gender stereotype we faced three decades ago. Because we still live in a society which sees the world from a masculine perspective, many women continue to internalize the patriarchal voice that tells them they are less than or not “good enough.” As a result, many girls feel invisible, inferior from birth, and discouraged from developing their full potential. And in the current political climate, there is still an undeniable attack on women’s health and reproductive rights.

So yes, we have made great strides in the outer world but we continue to battle a narrative embedded in our patriarchal culture for the last five thousand years. Hate arises as women’s power emerges and there is no end to backlash against women who speak truth to power.

Yet women today are acquiring the courage to express their vision, the strength to set limits, and the willingness to take responsibility for themselves and others in a new way. They are reminding humans of their origins, the necessity to live mindfully, and their obligation to preserve all life on earth.

9 Comments on “The 30th Anniversary of The Heroine’s Journey”