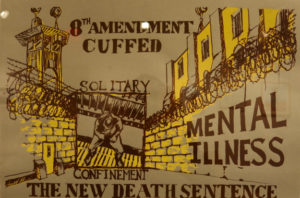 29,000 inmates at California State prisons are on food strike. They are rejecting their meals in protest over solitary confinement conditions, poor food quality, a lack of warm clothing and cut-backs in education and rehabilitation programs. There has been a consistent reduction of programs and classes offered in prison because of  funding cuts despite the fact that the facilitators for these programs volunteer their services. I know, I’ve met some of them. Prisoners receive good time credits for attending classes and rehabilitation programs but there is no good time credit if there are no programs available.

The current meal strike is the largest in California history involving 3 times as many inmates as have participated in hunger strikes before. Solitary confinement, called Administrative Segregation, is a clear constitutional violation, an insidious exercise of cruel and unusual punishment. Inmates can be held in solitary confinement indefinitely; some have been there for decades. Many held in solitary are mentally ill. To punish those on strike, correctional officers have threatened mental health and medical evaluation (read: solitary), the denial of visitors and mail, and measures to interfere with or stall release and parole.

The hunger strike began as California is under a federal court order to remove 9600 low-level offenders from the prisons to ease crowding (present capacity: 137.5%). Governor Jerry Brown has refused to comply with the court order instead extending a contract with a private prison to continue housing more than 8200 inmates in other states. Instead of addressing the complex issues of caring for the sick and mentally ill, Brown is using the prisons to warehouse them in solitary. It seems that Brown is in the pocket of the powerful Correctional Officers lobby.