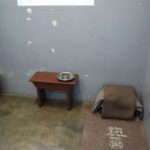 In an article in the Los Angeles Times, Paige St. John writes that California has decided to use special solitary confinement units to house mentally ill inmates as part of an attempt to comply with federal court orders to improve their care. Instead of using pepper spray to calm them down, isolation is the new treatment for the mentally ill. State prisons director Michael Stainer describes this segregation from the rest of the population as an intent to “offer a robust mental health program.” Please!

Please Note:  it is the view of these officials that curtailing the use of pepper spray and throwing mentally ill prisoners in solitary cells where they will spend 22 hours a day alone is considered “treatment for the mentally ill.”

I’m a mental health professional: treatment entails empathy, medication, therapy, psychosocial education, and an attempt to help an individual who suffers from a brain disorder to communicate with and integrate with his or her community. NOT to isolate him or her; that only makes mental illness worse.

By the way, this is considered progress. Last year, Governor Jerry Brown declared that such a humane approach was an attempt to “gold plate” the care of mentally ill prisoners.