I believe that memoirists are our contemporary mythmakers. When I was teaching a course entitled Myth and Memoir at Pacifica Graduate Institute it became clear to me that some of the same archetypal themes found in myth, such as a search for origins, for one’s identity, the mother-child relationship, initiation, journey, descent and return were also found in contemporary memoirs. Although not every memoir reflects a mythic theme, most memoir writers unconsciously reveal mythic themes in their desire to find meaning in their lives. Memoirists ask the same questions our ancestors did: “Who am I? Where am I going? What is my tribe? What is my purpose?” 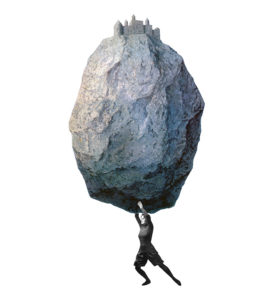 “who is she” by Terry Braunstein

The ancients looked at myth to help them understand natural and external events like the cycles of the moon. The creation of a myth told the people what to live by. Those of us who write memoir write it to figure out what the events in our lives have meant. We mine our memories and emotions to make sense of the disparate episodes in our lives. Making meaning is key to the writing of memoir; otherwise we could write a short story, a travelogue, a political essay, flash fiction.

Cheryl Strayed of the cleverly made-up name wrote Wild not only to document her 1,100-mile solo trek along the Pacific Crest Trail but also to come to terms with the death of her mother. Her book touched a deep nerve in readers everywhere because her story was mythic: the loss of her mother took her into a deep descent, and four years later, her journey from the Mojave Desert through California and Oregon to Washington ultimately healed her. Brando Skyhorse wrote Take This Man as a search to find his birth father who abandoned him and his mother three years after he was born. Like Telemachus, who searched for his father Odysseus, twenty years after he sailed for Troy, Skyhorse’s contemporary search for his father describes the longing for one’s tribe and the desire a child has to know his father. Both memoir and myth arise from a human need for connection.