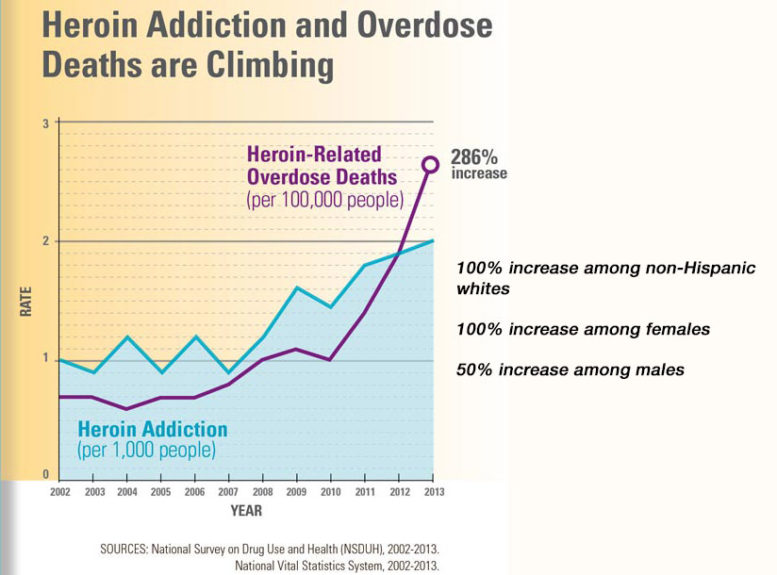 Addiction to heroin, and deaths from heroin overdoses has gained much needed attention from the public, legislators and law enforcement. Why?

Nearly 90% of those who tried heroin for the first time in the last decade were white. Deaths from heroin use rose to 8,260 in 2013, quadruple that of 2000. New Hampshire is one of the hardest hit states; it has seen a 68% increase in opioid overdoses from 2013, prompting parents who never would have suspected their children of using heroin to demand a change in law enforcement and legislation so that users get treatment rather than incarceration.

When 20-year old Courtney Griffin was using heroin, she lied, disappeared and stole from her parents to support her $400/day habit. Her family kept her addiction secret until she was found dead last year of an overdose. Now her parents are activists in the fight to treat substance abuse. Her father, Doug Griffin says that politicians and law enforcement are paying more attention now. “I work with 100 people every day—parents, people in recovery, addicts—who are invading the statehouse, doing everything we can to make as much noise as we can to try to save these kids.”

Last week, President Obama traveled to West Virginia, a predominantly white state with high levels of overdoses to discuss his $133 million plan to expand access for treatment and prevention programs. This new approach to drug abuse is a welcome move yet there is great injustice in the fact that it has only become a front burner issue since white parents have gotten involved.

Michael Botticelli, the nation’s drug czar admits that the demographic of people affect by the drug epidemic are white middle class parents who “know how to call a legislator, know how to get angry with their insurance company, know how to advocate. They have been so instrumental in changing the conversation.”

Unfortunately, this more compassionate approach is coming late for the scores of African Americans locked up for decades for drug possession or use. Kimberle´Williams Crenshaw, who specializes in issues of race at UCLA and Columbia law schools, said “one cannot help notice that had this compassion existed for African Americans caught up in addiction and the behavior it produces, the devastating impact of incarceration upon entire communities would never have happened.”

As a result of this new approach 32 states have passed “Good Samaritan” laws that protect people from prosecution for low-level offenses if they call 911 to report an overdose. And almost all states have made it easier for EMTs, family members and friends to obtain and administer naloxone, a medication that reverses the effects of opioid overdoses.

Parents, police and treatment providers are taking the “stigma” out of drug use, avoiding words such as “addict” or “junkie” and instead using terms that convey a chronic illness, like “substance use disorder.”

In October, 750 groups converged on Washington to bring their demands for treatment and they are collaborating to create a national organization, Facing Addiction, devoted to fighting the disease of addiction on the scale of the American Cancer Society and the American Heart Association. The fight to end drug addiction can be as successful as the fight to end AIDs.