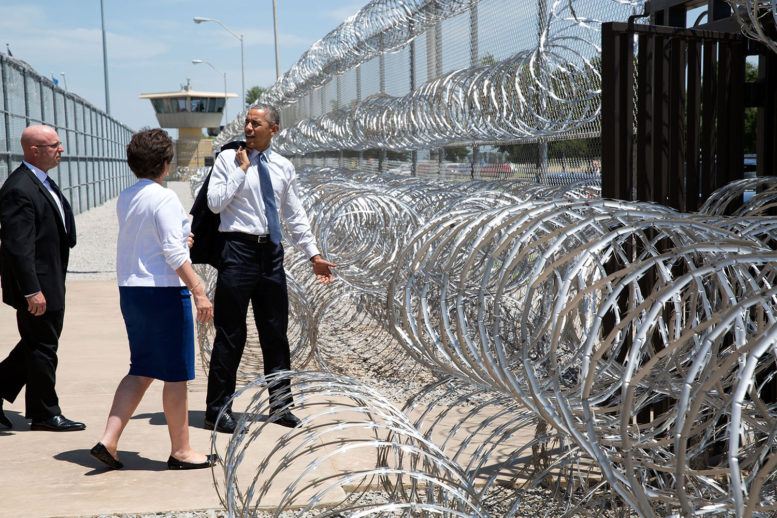 This week President Obama visited a federal prison in El Reno, Oklahoma, marking the first time in history that any sitting president visited a prison. As the President looked into a 9 by 10 foot cell for 3 prisoners, containing 3 bunks, a night table with books, a small sink and toilet with no seat, he reflected on the life he might have had as a black man. “There for the grace of God,” he noted, highlighting the thin line between prisoner and president.

Obama’s visit supports a bi-partisan overhaul of American’s criminal justice system. I have written before of the Koch brothers support for changes in the criminal justice system. Now many Republicans and Democrats have come to the conclusion that we give excessive sentences to many low level non-violent offenders at an enormous moral and financial cost not only to the offender and his or her family but to entire communities. Most inmates upon their release, struggle to get jobs and housing because applications for employment and apartments all ask if the applicant has ever been convicted of a felony. Any felony, including drug possession or burglary. We’re not talking about rape, murder, or assault.

The prison was locked down during Obama’s visit so the only inmates he saw were 6 non-violent drug offenders who were selected to have a 45-minute conversation with the President that will be shown on HBO in the fall. After talking with the men, Obama commented that they did not have the kind of support structure, resources or second chances he did that would have allowed them to survive the mistakes they made. He went on to say: “We have a tendency to almost take for granted or think it’s normal. It’s not what happens in other countries. What is normal is teenagers doing stupid things. What is normal is young people making mistakes.”

Advocates for criminal justice reform are addressing prison overcrowding, excessive sentencing and the dearth of rehabilitation programs both in prison and upon release. Republicans have been working with Democrats to draft legislation addressing such concerns. Speaker John A. Boehner said he would bring such legislation to the House floor this year.

I wish President Obama would have been there on Visiting Day to see the families lined up to see their loved one behind bars—usually sons or husbands—who instead should be home contributing to their families and communities. Prisoners are not the only persons out of sight, out of mind. So are their families.

13 Comments on “Criminal Justice Reform is Having a “National Moment””